You Are Emerging From Your Messy Transition 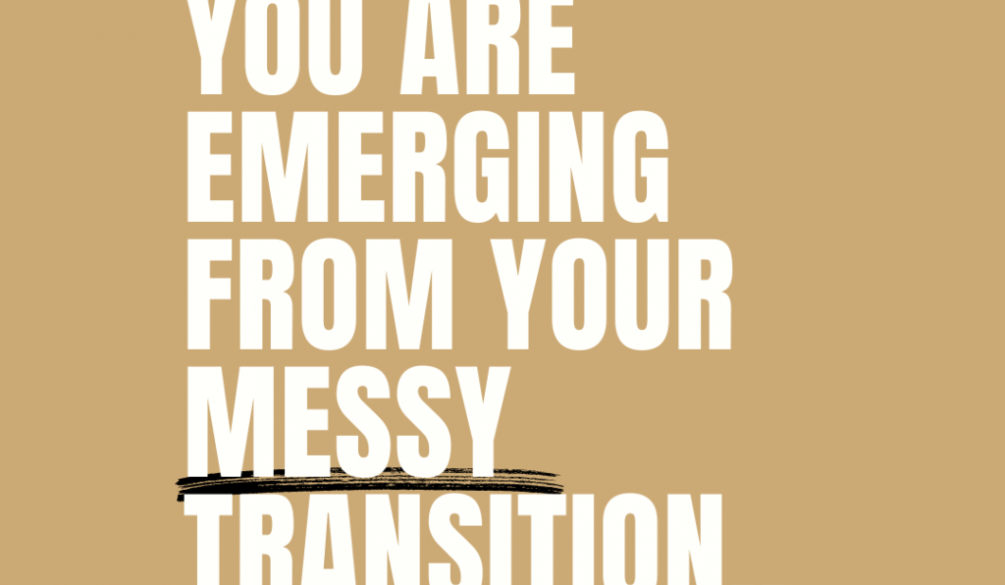 “Soon you will feel a shift in your vision, where you once only saw the greatest battle of your life, you will see the glorious new day dawning”

“You will realize that the past few years has been a narrow and perilous path you didn’t expect and couldn’t avoid, but it was also the path to your freedom”

“You will see the smoke and rubble behind you and no longer see failure and defeat but my  protection and faithfulness, and promise over your life”

“You will finally take your survival backpack off from your days of searching and waiting, and leave your nomadic season behind and settle in safety”

“There were impossible obstacles you didn’t even know you overcame”

“Soon you will wake up and feel like you put on a fresh new pair of glasses. You won’t see the same anymore. Where you once only could see the warfare you will now be able to see the breakthroughs on the other side of them”

“Where you could only see lack, deficits, and the unraveling, you will be undone when you see how much I have been building you, preparing you, and setting you up for decades to come”

“I know you have felt like all is lost, that the world around you is crumbling, and it has been so long since you have seen a win, but there is something building you don’t yet see”

“You have been struggling to believe that you have a future left and afraid that your children won’t have one, but I am breaking the cloud of foreboding that has made you feel powerless to these events taking place around you in the earth”

“I am giving you new prophetic vision and a lens to see beyond any storm and any giant that you ever face again. Your life will be a stake in the ground of HOPE for those around you that have lost it”

“You will see that you were created for this moment, this hour. You will roll up your mat next to the pool of waiting and embrace this season without the fear and anxiety that once shut you down”

“And you will see that out of the fires of this battle season I have forged you as my weapon, my warrior, my giant killer and dread champion, and you will be a beacon and a sign of victory that I am moving in the earth and the brides greatest days are here NOW!”

Yesterday morning the Lord spoke this to me and I didn’t get the chance to post it, but as I was waking this morning I heard these words “And David took in his hands..” from 1 Samuel 17:40

“Then he took his staff in his hand, chose five smooth stones from the stream, put them in the pouch of his shepherd’s bag and, with his sling in his hand, approached the Philistine”

The shift that is upon you and I right now is that God is turning the defeated and tired into giant killers again. We have become so acquainted with the obstacles, the facts, the newsreel of defeat, and the constant preaching of the size of the giant.. but God is using David’s in this hour who won’t let this beat them.

So I dare you to go against the torrent of fear, ask God to refresh your hope and fight again and go pick up your stones. Goliath wants compliance and a people who will just lay down and accept what the enemy is doing in our nations, families, and communities but we won’t relent!

Praying for those who are weary that you would be refreshed today and get back your hope in Jesus name!